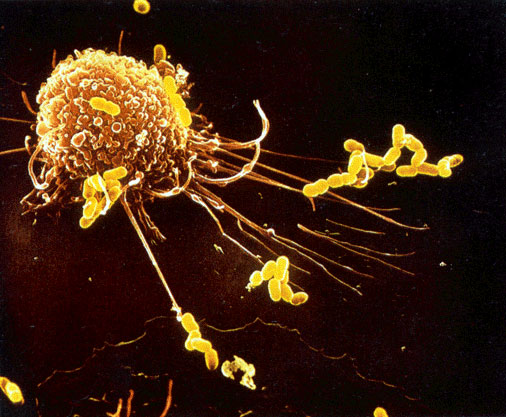 A modified antimicrobial peptide has been developed which goes the extra mile: as well as showing activity against a wide range of harmful bacteria, it also backs up the immune system, helping it to deal with infection more effectively.

Antimicrobial peptides (AMPs) are short sequences of amino acids, produced across all kingdoms of life, which are a major part of the innate immune system – that is to say, the more ‘automatic’ part of the immune system which starts to act as soon as a pathogen is introduced. Being easy to modify and create in the lab, AMPs are being increasingly recognised for their potential in the fight against antimicrobial resistance as significant alternatives to more traditional antibiotics.

Clavanin-A is an AMP which was isolated from the marine animal Styela clava back in 1977. The researchers, whose work was published on the 2nd November in Scientific Reports, modified the structure of clavanin-A by adding a sequence of 5 amino acids. They added the sequence after noticing that it was present, or conserved, in a large range of AMPs with an ability to modulate the immune system. They named this modified form clavanin-MO.

They tested both clavanin-A and clavanin-MO to determine how effective each was at stopping the growth of a range of gram-positive bacterial strains, including Staphylococcus aureus, MRSA and Enterococcus faecalis, and gram-negative strains (including Escherichia coli and Pseudomonas aeruginosa). They found that both forms of the AMP were effective at stopping the growth of all bacterial strains – but clavanin-MO was able to show more activity that its natural counterpart in every case. It was also better at stopping the growth of drug resistant gram-negative bacteria than gentamicin and imipenem, two antibiotics commonly in use. The authors stated that clavanin-MO’s activity against MRSA highlights the ‘potential of this synthetic peptide to overcome antibiotic resistance’.

Clavanin-MO also showed the ability to affect biofilms, decreasing the biomass of Klebsiella pneumoniae. This is important because biofilms, basically a large cluster of microbes forming a layer, are a major source of infection in humans and, importantly, are several times more likely to show drug resistance than their non-associated counterparts.

A big concern when considering potential therapeutic molecules such as clavanin is whether it damages the cells of the organism it’s being used to treat or, in other words, how toxic it is. When the researchers treated a range of cells including mouse red blood cells, fibroblasts, and human embryonic kidney cells, with clavanin-A and clavanin-MO they found no significant toxicity. When they injected mice with both forms of clavanin, neither showed any evidence of toxicity either. What this suggests is that the AMP is also promising in terms of the low risk of damage to our cells.

One of the main findings of the study was that both clavanin-A and clavanin-MO were able to affect components of the immune system and influence inflammatory response, showing that they have ‘immunomodulatory’ properties. Inflammation is a crucial immune function, driven by mediators such as cytokines, which basically allows immune cells to pinpoint the site infection or damage, deal with the affected cells and start the process of repair. It’s a crucial process, but too much inflammation can lead to chronic damage, so it’s important that it can be regulated by our system. The peptides were able to raise the level of IL-10, an anti-inflammatory cytokine while also lowering the levels of IL-12 and TNF-ɑ, two pro-inflammatory cytokines which boost inflammation and could potentially lead to excessive damage.

The researchers found more evidence of clavanin’s ability to influence the immune system when they discovered that healthy mice injected with clavanin-A and clavanin-MO showed a large increase in the number of leukocytes circulating in their peritoneal fluid. Leukocytes (white blood cells) are vital in the immune response and protecting the body against pathogens, so a boost in their number in theory results in an increased ability to fight infection. They then tested the effect of clavanin in mice infected with E. coli and S. aureus. Without the treatment of peptide, leukocyte number increased after 24 hours of infection – but when mice were injected with clavanin-A and clavanin-MO, leukocyte number showed a dramatic increase after only 3 hours.

With the threat of antibiotic resistance looming over us, there is an urgent need to come up with new treatments, novel ways of dealing with infections in a world where more and more antibiotics are becoming useless against the pathogens they’re meant to fight. Clavanin-A, and particularly clavanin-MO, represent a promising alternative to traditional antibiotics – they’re active against a wide range of organisms including drug resistant strains, they show low toxicity and can even help bolster our immune system. But there’s more to do – the author’s state that more work is needed to understand the exact mechanisms which the AMPs act by, and also to determine if more modification of clavanin’s structure could improve its activity and stability.