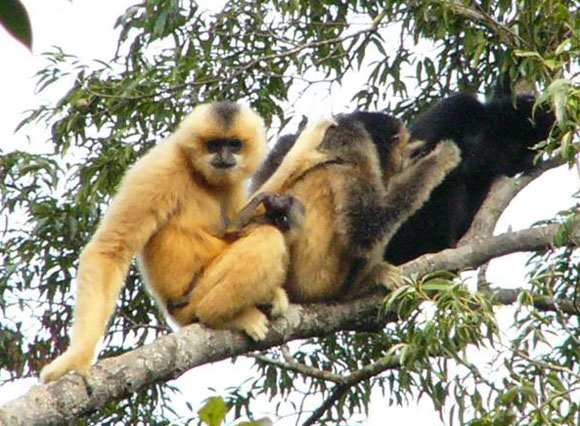 Hainan gibbons, or Nomascus hainanus, love to sing. As a new day dawns the adult males, their fur a deep, rich black, climb to the top of the canopy to greet the rising sun with their warbling cry. Soon the females, distinctive by their golden colouring, and their young join in, adding their voices to the wild symphony.

Each family of these beautiful animals usually consists of two females, one male and their offspring. They live in the forest canopy, using their long arms to quickly climb and swing through the trees with ease.

This species is one of, if not the, most endangered mammals in the world. Native to Hainan Island, located in southern China, the entire species is limited to approximately 15 square kilometers of forest in Bawangling National Nature Reserve (BNNR) – a mere fraction of what they used to call home. In the 1950s there were estimated to be approximately 2000 Hainan gibbons spread across the island. Thirty years later this population was decimated, with only 30 to 40 counted in the early 1980s.

Now this number has shrunk even further, leaving this species teetering on the edge of extinction. Only three social groups, and five females of breeding age, have been recorded by the conservation groups battling to save them.

So how has the Hainan gibbon come to be in such a precarious situation? Primarily, this can be attributed to two main causes. Firstly, the growth of timber and rubber industries has led to massive amounts of deforestation across the island, great swaths of forest cut down for wood, to make room for rubber plantations and to create housing for an expanding population of people. Loss of this forest means that the Hainan gibbons lose their homes and their food sources. Additionally, the establishment of pulp tree plantations around the island has an impact on soil moisture, impacting the growth of other plants and trees and consequently affecting the gibbons’ ability to live in these areas.

Secondly, humans have had a huge, direct impact on the gibbon population. Hunting these apes for meat and to acquire ingredients for so-called traditional medicine, and their capture for the illegal animal trade, has led to a drastic decline in their population.

When a species is so few in number, they’re inherently at greater risk from a number of factors. Random events like disease or food shortages have a much more significant effect on smaller populations than larger ones, as do demographic fluctuations (the population being skewed towards males or females at a given time) and human influences such as poaching.

There’s also the genetics to think about – fewer individuals means there is a greater chance of mating with a relative. This drives the amount of genetic variation in the species as a whole downwards, increasing the chance of inbreeding effects and putting them at risk to a number of detrimental factors, like reduced fertility and increased susceptibility to disease.

A low population number can also make it difficult to work out what the best course of action is in protecting the species. Conservation efforts need important information on the animals’ ecology and trends but, with so few around, studying them to get this data can be easier said than done.

But there is reason for hope. Organisations, such as the Zoological Society of London, Kadoorie Conservation China and groups in the BNNR have been working tirelessly to prevent the Hainan gibbon from disappearing completely. Their population has increased recently, from just 13 recorded individual apes in 2003 to the 26 now recorded.

Public awareness campaigns have been launched in China to bring more attention to the cause. In 2005, the first Conservation Action Plan to protect the Hainan gibbon was created. This outlined various strategies, such as ongoing monitoring of the gibbon population, reforestation and increased patrols to prevent poaching and logging. Numerous projects to study the gibbons’ ecology, habitat and population dynamics have also been funded.

Even with only 26 gibbons remaining, they can still recover and thrive. In an interview with National Geographic, Richard Young of the Durrell Wildlife Conservation Trust said, “The Mauritius kestrel was down to four individuals when we stepped in. Their population now stands at 400, so we know what’s possible.”

Similarly, the population of the Chatham Island black robin recovered after sinking to just five individuals in the 1980s.

It’ll take carefully coordinated efforts and intensive management to make sure that the long-term recovery of the Hainan gibbons can be ensured. There’s still a long way to go, and the journey to bolster their numbers back to a healthy population is going to be difficult – but it isn’t too late to keep these animals singing at the dawn of each new day.